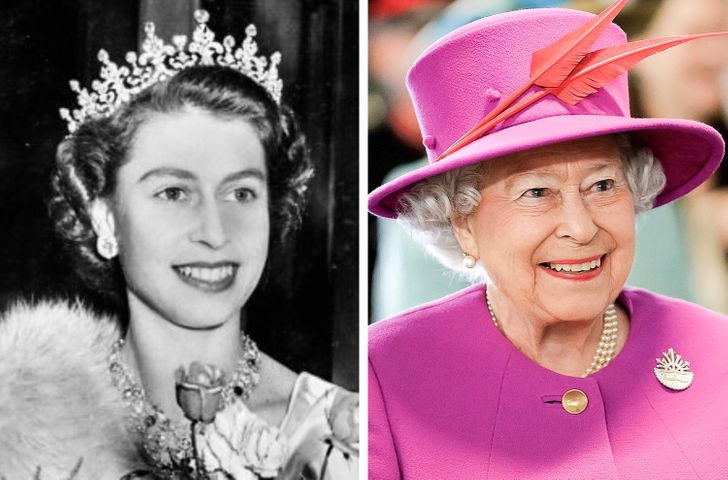 At her birth, she was third in line to the throne. She was never meant to become a monarch.

On April 21st, 1926, Elizabeth of York was born to the Duke of York, second child to king George V, and the Duchess of York, of the Bowes-Lyon family, in Mayfair, London.

After her grandfather George V died in January 1936, her uncle, Edward, Prince of Wales, became king as Edward VIII. His reign was short: following a constitutional crisis regarding his desire to marry twice-divorced American Wallis Simpson, he abdicated in favour of his brother Albert, Duke of York. Her father thus became king as George VI in December 1936. And as his first daughter, she became, barely 10, the new Crown Princess, so to say next in line to the throne of England.

She became queen at only 25 years old!

In 1947, she married Philip Mountbatten, Duke of Edinburgh, former Prince of Greece and Denmark, at Westminster Abbaye. They were referred to as Duke and Duchess of Edinburgh. Their first son, Prince Charles, came the next year, and his siblings followed: Princess Royal Anne in 1950, Prince Andrew in 1960 and Prince Edward in 1964.

While on a diplomatic visit in Kenya with her husband in February 1952, her father and king George VI passed away due to lung cancer. She became the new Queen of England and of the Commonwealth at just 25 years old as Elizabeth II. She was crowned 16 months later, in June 1953, after a grieving period. Interestingly enough: then Prime Minister Winston Churchill opposed her coronation being broadcasted on television, but to no avail. It was shown and translated in 44 languages!

The Commonwealth is a political association of 54 states, mostly from the former British Empire, which grew from 8 to 54 countries under her reign. England’s Monarch has a purely symbolic role as Head of the Commonwealth, although it should not be disregarded. Indeed, in 1961, Queen Elizabeth II went to Ghana on an official visit, despite the numerous assassination attempts President Kwame Nkrumah had faced, putting her at risk. Sympathizing with the USSR and on the brink of leaving the Commonwealth, Ghana remains in the Commonwealth and her visit is remembered as a success. Pictures of her famous danse with President Kwame Nkrumah made the front page.

Though the Commonwealth represents a complicated legacy, even stalwart Republicans such as Australian Prime Minister Anthony Albanese stated Her Majesty’s “intemporal decency” at her death. Most countries began a mourning period in remembrance of Queen Elizabeth II, though some such as India had mixed reactions as despite most countries of the former British Empire gaining access to independence under her reign, it was rightfully felt she stalled decolonisation.

In 1969, in an effort to give a more humane image of the Monarchy, Her Majesty invited cameras into Buckingham Palace, to showcase the day-to-day life of the Royal Family. The 2h documentary, simply titled “Royal Family”, was broadcast by the BBC and seen by more than half of Great Britain. Criticism ensued, including the feeling of a banalisation of Royalty and a Royal Family depicted as out of touch with the times. She prohibited it in 1972, although parts of it are still online.

During the Trooping the Colour ceremony in June 1981, she was fired at 6 times, with what turned out to be blanks, but managed not to fall from her horse and remained unscathed. In October, on a visit to New Zealand, another man fired a rifle but missed.

40 years on the throne, divorces and heart of glass

During her speech to celebrate her 40 years as Queen, she qualified the year 1992 as an “annus horribilis”. Indeed, in March, Prince Andrew split from his wife Sarah Ferguson; in April, Princess Anne from her husband Mark Philipps; in December, Prince Charles from Lady Diana after eleven years of marriage and scandal. Moreover, in November, a fire almost fully destroyed Windsor Castle – 36 million pounds were required to save it.

On August 31st, 1997, almost a year to the day after her divorce, Lady Diana died in a car crash in Paris while trying to escape paparazzi. Despite the shockwave her death created, the Queen denied her royal funerals, stating that she had officially left the Royal Family. Furthermore, no flags were flown half-mast on Buckingham Palace. The Queen’s image shattered. She finally spoke publicly the day before Lady Diana’s funeral, which helped appease the public’s hostility to the crown.

One of kind visit to Ireland

In May 2011, she visited Ireland on First Minister Mary McAleese’s invitation, becoming the first British Monarch to visit Ireland since its independence… ninety years earlier!

The end of an era

In September 2015, she became the longest serving British Monarch, beating her great-great Grandmother Queen Victoria’s record 63 years on the throne.

After Prince Philip’s death in April 2021 at Windsor Castle, an 8-day mourning period was instilled, and a moving picture was taken of the Queen, alone before her husband’s casket due to the pandemic restrictions. He did not receive national funerals.

This year, she celebrated her platinum jubilee for her 70 years on the throne, 4 days of celebration throughout London, before passing away on September 8th and leaving her son Charles, Prince of Wales, to succeed her on the throne.

Her legacy is rich. Though scandals within the Royal Family, economic and social hardships for Great Britain and mixed-feelings from Commonwealth nations marked her reign, it is undeniable that her 70-year-long reign over the United Kingdom and the Commonwealth will let her memory live on. The Monarchy is left to face the challenge of its public image after Queen Elizabeth II.